Sixty-eight percent of U.S. households own a pet, according to the 2017-2018 National Pet Owners Survey. And many of those homes also have children.In fact, parenting experts recommend pet ownership for families. Caring for animals helps children learn responsibility, empathy and compassion—along with increasing their activity level and reducing stress.In cities and towns, dogs and cats are the norm, with much smaller percentages of families owning fish, birds, reptiles, hamsters, etc.On farms, however, children have the opportunity to help raise other animals as well.

Chris and Kristi Effling raise cattle on their ranch/farm near Highmore, S.D. Their three daughters show cattle and pigs at local, regional and national livestock shows—and they’re very successful!“We run about 300 purebred cattle,” Kristi says. “Our oldest, Cagney, who’s a freshman at Northeast Oklahoma A&M, shows predominantly Charolais. Our middle child, Chesney, who’s a sophomore at Highmore High School, went the Hereford route, and our youngest, Kenidey, has stepped in with the Simmentals.”Every win is a result of months of hard work. The girls spend hours daily caring for their show animals.“They spend probably eight hours a day in the show barn during their summer vacation,” Kristi says. “People say, ‘oh, they do so well’­—but if you put eight hours a day into anything you do, whether it's basketball, or football, or showing livestock, you're probably going to get pretty good at it. So it's like a job for them, that's their summer job. And you get out of it what you put into it.”

But caring for show animals isn’t just a summer job. The girls pamper and train heifers and pigs year round.“I feed them morning and night,” says Chesney. “I wash them every day and put stuff on their skin and hair. That way it stays healthy and doesn’t get dry—just like we do with our own skin and hair. If they’re cattle, we also dry them.”“Every night we’ll work with our cattle out on the lawn or in the pen,” she continues. Training animals for the show ring involves walking, standing and moving correctly.Like her mother, Chesney sees showing animals as comparable to being involved ina sport. “You have to be coachable to be in a sport, and you kind of have to be coachable when it comes to cattle. You have to be willing to take suggestions, learn from people that are older and be willing to succeed.”

In some respects, show animals are very much like pets.“These kids have a bond with them,” says Kristi.According to Chesney, it varies. “Every animal has their own personality,” she says. “There are some that maybe don't act quite as nice, so you don't like them quite as much. But then there are some that are really sweethearts.”“My pigs this year, they're like pets. They're kind of like dogs to me. I'll hang out with them in the pen and pet on them, and they have this squeaky toy that they have in their pen that they like to play with. So I mean, it varies from their personality, but there are definitely some that basically are pets,” she says.Her younger sister Kenidey agrees. “Sometimes they just don't want to be a show cow or a pet or anything, so you don't really like them. But some of them, the first time you get them in, they're just so easy and you just fall in love with them. They're like your pet, and you just want to go hang out with them every day.”

Kristi and Chris feel that showing animals has been excellent for their daughters.“It teaches them responsibility,” Kristi says. “But it also helps them build relationships in the livestock industry. You meet people from all over the world and a lot of them become like family to us.”Chesney says, “Showing animals has taught me a lot about myself. I've learned about hard work and dedication, and working hard.”“I like that I get to meet new people,” says Kenidey. “All of my best friends come from the cattle world and the pig world, and it's just so much fun.”Both girls say that showing animals gives them special family time together. Chesney says, “I really love the fact that we do it as a family, and I get to spend a lot of time with them.”Showing animals is beneficial in other ways as well. Cagney, the Effling’s oldest daughter, went to college with a livestock judging scholarship. All three girls have traveled widely as part of showing, as well.

Because the Efflings are active farmers/ranchers, Kristi is sensitive to criticism from people who may not have experience raising livestock.“I don't know any farmer, rancher, livestock person that doesn't do what they feel is in the best interest of the animals when they're taking care of them,” she says.“Whether they're out in the pasture or in the show barn, our cattle are monitored,” Kristi says. “Especially our show barn cattle, they're monitored all day long to make sure they have the right temperatures, that they're not too hot or too cold.”“They're bathed twice a day,” she adds. “It's like going to the beauty salon for a female, but they get to do it twice a day, somebody does their hair. And the products we have are good products, they're healthy products."For the Efflings, like many farm and ranch families—and many nonfarm families statewide—caring for animals is part of their everyday lives. It teaches important life lessons and provides opportunities for children to learn, grow, form relationships and enjoy family time. 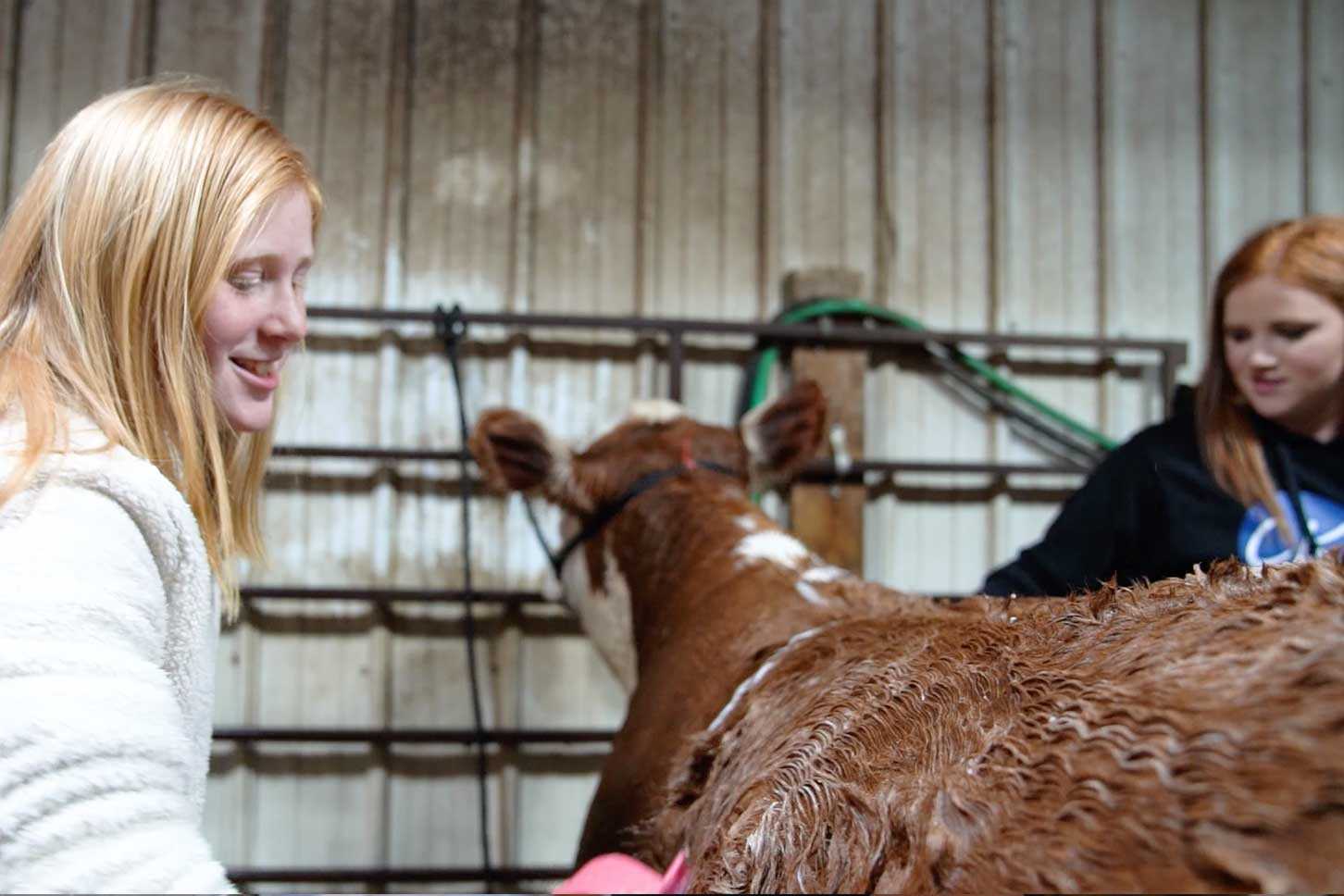